Yumi is a relatively short girl with green eyes and medium length brown hair tied into two pigtails with pink ribbons. She is most often seen wearing the uniform of Lydian Music academy.

Yumi is a very avid lover of anime and always compares life to that of an anime. She is quite often very energetic.

She is first seen Episode 2 comparing Hibiki to an anime character after she declines their invitation to Flower.

In Episode 3 she is seen along with Kuriyo feeding Hibiki as she writes her report. She makes another comment about Hibiki getting it done as it was not an anime. She tells Hibiki that she is lucky to have Miku and leaves with Kuriyo and Shiori to play badminton.

In Episode 12, her tendency to compare real life to anime proves to be useful when she points out that she's small enough to fit through a hole to the backup generators for the academy, which would allow them to let Hibiki know that they're all right. Together with the other three girls, she is able to do just that before joining all of the survivors in singing the Shiritsu Lydian Ongakuin Kōka, which revives Tsubasa Kazanari and Chris Yukine, as well as unlocking the X-Drive for all three Symphogear users. 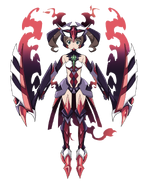 Shiori and Yumi in the OVA

Kuriyo, Shiori and Yumi in the OVA