Tiki (ティキ, Tiki?) is an Autoscorer from the Bavarian Illuminati. She was created by Adam Weishaupt to observe the motions of the planets and record them as star maps.

Tiki's name carries the meaning of "the first man on Earth", which she shares with Adam, her creator.

Tiki is described as being "in love with love itself". She is cheery and upbeat nearly to the point of being obnoxious. She is loyal first and foremost to her creator, Adam, and sticks to him like glue, claiming that she can't be herself without him. She believes that by having such a passionate love, she will one day become more than just a doll.[1]

Created by the director of the Bavarian Illuminati, Adam Weishaupt, Tiki is an Autoscorer designed to record and observe planetary motion. As a one-off created for a unique purpose she was never given a specific designation. However, at some point she began referring to herself as "Tiki".[2]

Tiki comprised a key part of the plans of the Illuminati; however, four hundred years ago during a battle at sea, Finé attacked Adam and Saint-Germain. Tiki took the blow meant for Adam and was sent overboard, where she sank into the depths of the ocean and deactivated.

She was later found during the great world war by a U-boat attached to the German Navy. The results of investigation determined that she was something developed using unknown technology and techniques, and was thus labeled a "sacrist". However, nothing regarding how Tiki could be used was determined, and so she became nothing more than a statue that sat in storage. After the war ended, Tiki was taken to the Val Verde Commonwealth by a defecting soldier, where she remained undercover in the Die Spinne Barrier until being discovered by Saint-Germain, Cagliostro, and Prelati.[3]

Upon returning to her hotel in Tokyo, Saint-Germain rebooted Tiki using the Antikythera Gear, bringing her back to life. 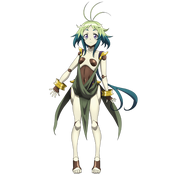 Concept Art in XDU
Add a photo to this gallery

Tiki alongside Adam in the past

The Antikythera Gear being placed inside Tiki

Tiki being crushed by Adam
Add a photo to this gallery

Adam and Tiki in the OVA

Retrieved from "https://symphogear.fandom.com/wiki/Tiki?oldid=67093"
Community content is available under CC-BY-SA unless otherwise noted.