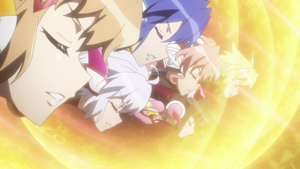 The Superb Song (絶唱, Zesshō?) is a song sung by a Symphogear user that unleashes the full power of the Symphogear into a massive attack unique to the gear.

The superb song is the Symphogear system's strongest, most explosive attack, it is normally used while the user is in a critical situation. The Symphogear is not enough to reduce the backfire or load on the body, even if the body has been enhanced. It is a trump card, a double-edged sword. However, because of the large amounts of phonic gain, any disharmony between the Symphogear and its user will result in damage to their body, and potentially the destruction of the Symphogear itself if their compatibility is low enough. Kanade Amou died due to having low compatibility and from not taking LiNKER the day of the concert for various reasons involving the Nehushtan Armor experiment. Serena Cadenzavna Eve died from using the superb song incorrectly as Tsubasa had, and getting crushed by rubble. In all likeliness if she hadn't been crushed by rubble she would have survived as Tsubasa did if she got taken care of.

The damage inflicted by the superb song is determined by the compatibility coefficients, if the coefficient of compatibility is high, less damage will be done. Even though Chris Yukine and Tsubasa Kazanari are recognized as compatible with their relics, it is not possible to negate all the damage done by the superb song; it depends on the body, it also depends on if they use it correctly. Hibiki Tachibana can completely nullify the damage from another Symphogear's Superb Song by channeling it through her S2CA Tri Burst technique, shouldering the burden on herself due to her extreme compatibility making it much easier for her to bear. This can also be used when fighting other gears by absorbing the energy from their Superb Song when they attempt to use it against her. An overdose of LiNKER can be used to mitigate the damage from a superb song by temporarily raising compatibility rate to a high enough value that the damage is minimal.

Originally, the superb song is supposed to be emitted through the armed gear to enhance the operational efficiency of energy and negate the damage done by the superb song. Furthermore, there is a characteristic of each Symphogear's superb song, that needs the user to use an extended armed gear.

In the song Xtreme Vibes, Japanese lyrics are laid over the superb song lyrics in furigana. However, it is unknown if these lyrics apply to the superb song across the series, or are only a one-time instance for this song. One point against the former is that the Japanese given does not match up to identifiable words in the superb song, such as babel, ziggurat, Finé.

Despite the official name revealed in episode 2 of G, as well as the G keywords[2], there have been several other terms used for the superb song:

It should also be noted that "a superb song (or poem)" is the definition of the term zesshō as given by Japanese dictionaries.[3]

Kirika using her Superb Song
Add a photo to this gallery

Kirika singing Superb Song
Add a photo to this gallery

Retrieved from "https://symphogear.fandom.com/wiki/Superb_Song?oldid=95894"
Community content is available under CC-BY-SA unless otherwise noted.