Shirabe Tsukuyomi (月読 調, Tsukuyomi Shirabe?) is one of the six main characters of the Senki Zesshō Symphogear series. Introduced as an antagonist, Shirabe later becomes one of the six protagonists of the series.

She is a Symphogear user who wields the Shul Shagana relic. She was also the latest reincarnation of Finé prior to Finé's death.[5]

Additionally, Shirabe is the star of the slice-of-life spin-off manga, Senki Kanshoku Symphogear ~Shirabe Meshi~, where she cooks meals for the Symphogear cast.

Tsukuyomi (月読, Tsukuyomi?) - Means "Moon Reading". It is also short for the name of the Shinto moon god, Tsukuyomi no Mikoto.

Shirabe has light pink eyes with long, straight black hair in a hime cut. Her hair is worn in pig-tails tied with pink & purple ribbons.

In G, She is most often seen wearing a pink and black long sleeved dress with dark pink stockings and black boots. When briefly possessed by Finé, she gains her distinctive golden serpentine eyes.[6]

In GX, Shirabe wears a pastel pink and black, lolita-style dress with short puffy sleeves and a pink ribbon around her waist tied into a bow on the back. She also wears black & pink stockings with white mary janes decorated with bows.

In AXZ, Shirabe wears a white, pink & purple sailor-style dress with a pink bow on her right hip and a pair of bubblegum pink thigh-highs with white & pink ankle boots.

Shirabe is a quiet and reserved, yet passionate and stubborn young girl. She is fiercely protective of who and what she holds dear, particularly Kirika. She claims to not be good at talking to other people, so she intentionally avoids getting too close to people who aren't Kirika.

At a very young age, Shirabe was caught in a traffic accident that took both her parents' lives, and she was the only survivor. Due to that accident, she lost most of her memories and any documents that explained who she was.[7] Shirabe was then kidnapped by the F.I.S. and placed in the White Orphanage, as one of the Receptor Children who could potentially host Finé's soul. Her current name of 'Shirabe Tsukuyomi' was given to her by the FIS, as Shirabe could not remember how the kanji of her name was originally read; AXZ Episode 9 implies her first name was originally read as 'Tsuki'.

After the death of Ryōko Sakurai during season 1, the FIS attempted to determine if Finé had revived in any of the Receptor Children, but were unable to do so. They then planned to dispose of the project, but due to an armed uprising led by Nastassja — with the help of funding provided by the Bavarian Illuminati — the existence of the confined Receptor Children was brought to light. In fear of criticism from the international community, the US government quickly changed their tune and arranged for the children to be released of their own will or provided shelter. At this point, Maria, Shirabe, and Kirika joined with Nastassja and Dr. Ver in order to stop the fall of the Moon. 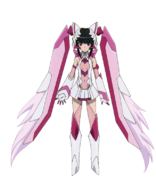 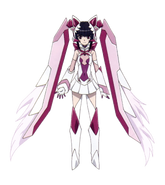 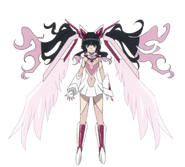 Shirabe owns the Relic Shul Shagana. As a candidate for the Symphogear, she has the ability to fight Noise with the use of the anti-Noise armour that clads her in battle. However, she requires LiNKER to do so.

Her Armed Gear is unusual in that it is not hand-carried, but rather consists of buzz saw discs of varying sizes hidden in the rabbit ear-like compartments on her head. In addition to this, Shirabe's boots each contain a buzz saw-like wheel which she can use as roller blades. As of the third season, her arsenal has been augmented with a pair of razor blade yo-yos, and even the skirt on her armor has been shown to be capable of being used as a buzzsaw.

As one of Finé's descendants Shirabe is able to form barriers called "Asgard" as a means of protection. However, this ability was most likely lost when Finé sacrificed her soul to prevent Shirabe from dying of a fatal wound.