Shinji has short brown hair and eyes. He is always seen wearing a black suit with a black tie and white collared shirt. While acting as Tsubasa's manager, he is seen wearing glasses along with his usual attire.

He is a very calm and quiet person. He lost his parents when he was young. His father worked for Genjuro Agency. He is very trustful and believes in Tsubasa and his comrades.

Shinji is first seen in Episode 2 placing handcuffs on Hibiki as a protective measure to escort her to the Mobile Disaster Response Corps. He displays his access pass and allows the elevator to ride down to the headquarters. He tells Hibiki to hang on before the elevator descends. Shinji laughs nervously at the sight of the welcome party for Hibiki. After Tsubasa asks him to, he removes the cuffs on Hibiki.

In Episode 3, Shinji gives Hibiki her first business card as he is now revealed as Tsubasa's manager in the public eye. He and Tsubasa leave shortly after to attend a meeting about her album. As they walk down the hall, he speaks to her about the live performance scheduled for the end of the month as he asks her to make more time for rehearsals. He then goes on to speak about the English record company. Tsubasa tells him to refuse their offer, he asks if she is angry and she denies it. As she continues to walk, he hurries to catch up.

In Episode 4, he talks to Hibiki as he buys drinks from a vending machine. He hands one to Hibiki and continues to talk about Tsubasa and Kanade. He explains the use and effects of the Superb Song to Hibiki. As she cries, he comforts her and asks her not to hate Tsubasa.

In Episode 5, Shinji shows up and informs Hibiki of Tsubasa's stabilisation and to give her a pep talk. As Hibiki leaves, Shinji comments that he wished Tsubasa was more honest with her emotions like Hibiki.

Shinji calls Hibiki in Episode 6, asking her to take on something for him as he was tied up with another assignment that seemed like a raid.

Shinji shows up to take the Flower owner off Hibiki's hands while she runs off to find the Noise in Episode 8. He appears later to return Miku's bag back to her.

Shinji comments that he would appreciate it if Ryoko didn't like that he wasn't present after her comment about a girl's talk in Episode 9. He makes a brief comment about the girls before being punched in the face by Ryoko. He is then kicked in the face by Ryoko for another comment. Later on Shinji comments that Tsubasa's rehearsal went well and introduces her to Tony Glazer, the producer for Metro Music and the man that wanted to take Tsubasa to the international stage.

Although not a relic user, Shinji's ninja training makes him capable of various superhuman feats including illusory movements and running on water. He is also seen to be a very proficient fighter and has very accurate aiming with his gun. 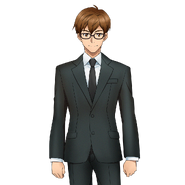 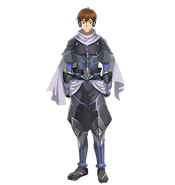 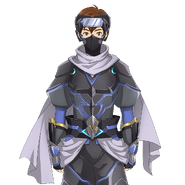 Shinji receives call from S.O.N.G. when acting as Tsubasa's manager

Shinji take away Shirabe away from the ship

"I don't believe you can sing without emotions."- (Episode 3)