She is an alchemist from the top brass of the Bavarian Illuminati, and she has been a member of the organization for at least four hundred years.[2]

She is based off of the Count of St. Germain, a French aristocrat in the arts and sciences from the 1700s who claimed to have lived for centuries and is shrouded in mystery. See also St. Germain (Theosophy).

Saint-Germain is kind-hearted and thoughtful. She cares deeply for Cagliostro and Prelati. With the efforts of Hibiki Tachibana, she regained her original personality following Adam Weishaupt's treachery.

After being physically abused by her father, her mother's death, and the humiliation she faced as a sex slave, Saint-Germain became cold and obsessed over achieving her goal. She believed the mankind would be freed by "new world order", until she abandoned her ruthless personality once she realized she, Cagliostro, and Prelati were Adam's pawns the whole time.

Saint-Germain learned to read from a nobleman who taught her out of amusement as a reward for her services in bed. Ever since then, Saint-Germain filled her empty heart with a desire for knowledge. After an unspecified amount of time, Saint-Germain appeared as an aristocrat in French society, passing as a male, and soon accumulated a large amount of followers and was given the title of "Count". From there, Saint-Germain used the finances gathered from her followers to begin her alchemical research into the "Philosopher's Stone".[3]

There are many ways to achieve a mastery of alchemy, however, each path shares a common goal of reaching the state of "perfection". When Saint-Germain discovered the deepest secrets of alchemy, she succeeded in recreating her body into a perfect being, which now allows her to live for eternity. In order to realize the ideal she holds in her heart, she now strives to create the "power of god." 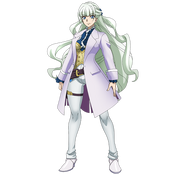 Saint-Germain as a child

Saint-Germain along with the Symphogear users.

Saint-Germain in the OVA

Prelati, Saint-Germain, and Cagliostro in the OVA

Saint-Germain, Prelati, and Cagliostro in the OVA