Nastassja — has its origins from the Greek "Anastasia", although it is a popular name in Russia. The abbreviation of the name "Nastassja" is "Nastea". The name means "resurrection".

Sergeyevna — is her patronymic which indicates that her father's name is Sergey/Serghei.

Tolstaya — is a Russian surname. The male form of this is "Tolstoy".

Professor Nastassja was an older woman with lilac eyes and long, indigo hair that she meticulously tied back. Additionally, she adorned herself in a long black dress over a light-purple turtleneck. Despite her refined appearance, however, she sustained multiple injuries during Serena's attempt to quell the Nephilim's revolt using her superb song. As a result, she lost the use of her right eye — requiring a black eye-patch for protection — and became permanently confined to a motorized wheelchair. Moreover, she frequently coughed and spat out blood due to her severe internal injuries; thus, she required the medical assistance of Dr. Ver for sustenance.

The young girls who accompanied Professor Nastassja saw her as a motherly figure. Though she looked upon them with kind eyes, she often resorted to harsh and strict mannerisms in order to maintain group focus and cohesion. The older woman would frequently, yet begrudgingly refer to herself and her accomplices as "terrorists," while conversely acknowledging that the children were nothing less than gentle. Despite her seemingly cold demeanor, the professor was nonetheless selfless in her actions, as she risked her life on several occasions for the group's wellbeing — Maria in particular.

AXZ showed that in the past, Nastassja would physically abuse the Receptor Children by striking them with a riding crop as punishment for disobedience. However, Maria's memories revealed that the abuse she endured was a form of tough, yet genuine love from Nastassja. With every strike and disparaging shout, the old woman was overcome with remorse deep down. She performed such atrocities for the sake of improving the Receptor Children's tenacity, drive, and will to persevere.

Prior to the events of G, Nastassja was a member of the F.I.S. who trained Maria Cadenzavna Eve, Serena Cadenzavna Eve, Kirika Akatsuki, and Shirabe Tsukuyomi. At an unknown point, she began collaborating with John Wayne Vercingetorix.

After the events of the Lunar Attack, one segment of information regarding the sacred relics was released to the public, however the knowledge that Nastassja holds is far greater than that. 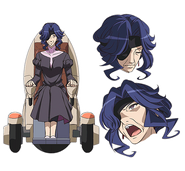 Nastassja with the young Cadenzava sisters