Masahito Shibata (斯波田 賢仁, Shibata Masahito?) is the Vice Minister of Foreign Affairs. He is often caught up in dealing with the complexities of current world affairs, but his main duty is to protect the Japanese government's national interest and the black art crystallised technology of the Symphogear system.

Although he is often seen having a rude personality, he is the only man that understands Genjūrō, and is generally a person who cooperates with the Special Disaster Response Team's operations. 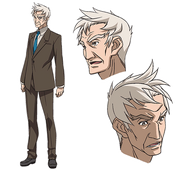 Retrieved from "https://symphogear.fandom.com/wiki/Masahito_Shibata?oldid=100956"
Community content is available under CC-BY-SA unless otherwise noted.