Maria Cadenzavna Eve (マリア・カデンツァヴナ・イヴ, Maria Kadentsavuna Ivu?) is one of the six main characters of the Senki Zesshō Symphogear series. She was initially an antagonist during G before becoming a protagonist from GX onwards.

She is a Symphogear user who primarily wields the Airgetlám relic, replacing her Gungnir she used in G.

Throughout most of Symphogear G, Maria claims to be the newest reincarnation of Finé after Ryōko Sakurai's demise. This ruse is eventually dropped, leading to confusion about the real identity of Finé's new host, as it is implied to be Kirika Akatsuki until G Episode 12 reveals it to be Shirabe Tsukuyomi.

Maria (マリア, Maria?) – Means the beautiful in Greek and comes from Miriam and Mirjam and the name from Jesus' mom: the virgin Maria.

Cadenzavna (カデンツァヴナ, Cadenzavna?) – is a family name which implements both European and Ukranian grammar, in which female names end in "a" (example: Kowalska, Składowska) and male in "i" (example: Kowalski, Składowski), while the "v" is common in Ukranian, Belarusian, and Russian surnames. Cadenza comes from the Italian word cadenza, and is a form of music that is usually played or sung solo.

Eve (イヴ, Eve?) – English name originating from Hebrew, meaning "life" or "living one". It is most famously known as the name of the Biblical Eve, the first woman and sinner who caused humanity to be expelled from the Garden of Eden.

Maria has cyan eyes and long pink hair with the top styled up in two horn-like curls, with a blue flower accessory centered into each curl. The rest of her hair hangs loose down to her hips.

In G, Maria is most often seen wearing a white corset-like top under a navy blue jacket with black frilled accents, a wide open collar, and white accents secured with a bow under her chest. She also wears white short-shorts, a nylon stocking on her right leg and black heels with black & white laced up leg-warmers.

In GX, Maria wears a light cyan top with three gold buttons and black shoulder straps. She has a black, purple & pink skirt with a white layer overtop and a bow in the front. She also wears a pair of black slingback heels with X-shaped straps.

In AXZ, Maria wears a salmon & lavender tailcoat-style top with a white rose design on the bottom right and a purple & white striped top underneath with a tight white miniskirt and a pair of white & purple high-heeled boots.

Maria's performer outfit in G, for Fushichō no Flamme.

Maria as a child.

Maria is an energetic idol and a bit mysterious. She's gradually revealed to have a conflicted heart, torn between her determination to complete her mission and her unwillingness to cause others harm. While she will gladly make harsh speeches and fight other Gear users, she cannot bring herself to harm normal people unless absolutely enraged. This conflicted nature makes her easily manipulated and vulnerable at times, but at heart Maria is just a kind and sincere girl who simply wants to help and protect everyone she holds dear.

Maria and her sister Serena originally hail from Ukraine. They were constantly put at risk by the flames of war fanned by territorial and ethnic disputes in the region. Eventually, Maria and Serena lost their home and family in the wars and became vagrants, wandering aimlessly and huddling together to stay alive. Sometime later, they ended up in the White Orphanage as part of the Receptor Children project.

Six years prior to Symphogear G, Maria watched Serena sacrifice herself in order to defeat the monster Nephilim by using her Superb Song. It was during this time that Professor Nastassja had lost the ability to walk as her legs were trapped under debris caused by the energy whiplash when she attempted to save Maria.

Years later, after the death of Ryōko Sakurai during season 1, the FIS attempted to determine if Finé had revived in any of the Receptor Children, but were unable to do so. They then planned to dispose of the project, but due to an armed uprising led by Nastassja — with the help of funding provided by the Bavarian Illuminati — the existence of the confined Receptor Children was brought to light. In fear of criticism from the international community, the US government quickly changed their tune and arranged for the children to be released of their own will or provided shelter. At this point, Maria, Shirabe, and Kirika joined with Nastassja and Dr. Ver in order to stop the fall of the Moon.

Sometime before Symphogear G, Maria made her debut as an idol and quickly rose to the top ranks in the US, eventually leading her to be arranged to duet with the top idol of Japan, Tsubasa, leading to the disastrous concert that would be used to awaken the Nephilim. 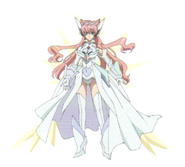 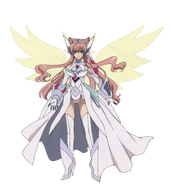 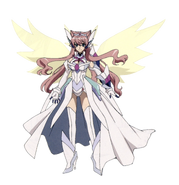 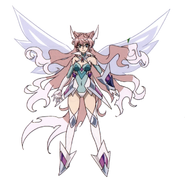 As a candidate for the Symphogear, she has the ability to fight Noise with the use of the anti-Noise armour that clads her in battle. However, she requires LiNKER to do so.

Maria has used two Symphogears during her tenure, the first being the second Gungnir which is now in use by Hibiki. While Maria wears it, it becomes known as Black Gungnir due to its distinctive dark color palette, and reverts to the relic's original emphasis on fighting with an enormous two-handed lance. Maria's lance is somewhat different in design than Kanade's, featuring two distinct blades in a Philips head arrangement. During Symphogear G, Black Gungnir featured a cape which Maria could control to animate and change shape, using it as her primary form of offense and defense instead of her lance, but in GX Black Gungnir had lost its cape.