Android Kirika's appearance matches the Original Kirika's mostly: She has short blonde hair and green eyes. She has two little black horns with X's on them to substitute the signature X hair clip.

Kirika wears a black jacket with green stripes on the shoulders with matching cuffs, a green shirt underneath, has white shorts and thigh high green socks with black and green boots. Underneath on her "skin" She has multiple band like lights on her limbs and a black plated part covering her front side, she also has an extended tail.

In Overdrive green flames appear all over her body and her eyes glow red. she can also turn her limbs into scythes. 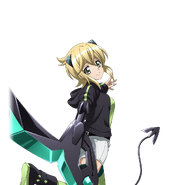 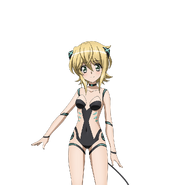 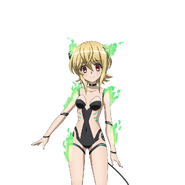 Kirika is kind, happy, and loves Shirabe. She often cooks dinner and cleans up whatever mess Shirabe would make despite her saying "it'll only be harder to find what she needs".

Despite Shirabe's constant insults on how she could never be her Kirika, she accepts that she's not good enough to be the real Kirika for Shirabe and makes sure to make Shirabe as happy as possible. At the end of TWIN HEART MELODY after she sacrificed her power to save the Kirika from coma, Kirika (Another) tells Shirabe that Kirika (Android) had informed her about everything she had done during her coma and said that her face lit up whenever she (Android Kirika) mentioned her (Another Kirika).

In Shirabe's hopes to revive her from her coma, she made an android identical to Kirika, intending to transfer her consciousness to the android. Instead, this resulted in Shirabe creating an android with Kirika's personality, to Shirabe's dismay.

Android Kirika returns but not mentally in LOST SONG -Chapter 3-, since her memory chip was burned when she sacrificed her power to save the Kirika from coma. Dr. Ver mentioned that the current science proved that it's 100% defect, but not impossibe to repair unless they have advance science. Currently the android body was remotely control by Kirika (Another) by using direct feedback system as a way for her to fight along Shirabe as she has not fully healed and lost the song in her heart which prevents her from using Igalima.

Unlike her original counterpart, Android Kirika does not make use of Igalima as her android output is sufficient to battle. 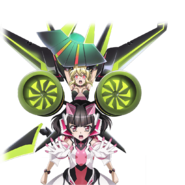 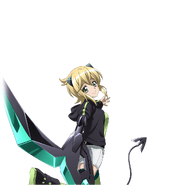 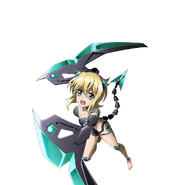