Introduced as an antagonist, Kirika later becomes one of the six protagonists of the series. She is a Symphogear user and wields the Igalima relic.

Kirika has green eyes and short blonde hair with an X-shaped clip on the left side of her bangs.

In G, She is most often seen wearing a black & green short-sleeved shirt with puffed-out sleeves that have white Xs on the side and a yellow three-layered ruffled skirt, black-and-white striped stockings, brown boots, and black and green arm-warmers and leg-warmers.

In GX, Kirika wears a black tank top with a white X across and a green short-sleeved hoodie with a black devil tail. She has light green shorts with black & green thigh-highs and a pair of black and green shoes.

In AXZ, Kirika wears a light green and black high-collared top with a heart-shaped cutout on her chest and many angular cutouts on her sleeves. She has a pleated white skirt with a black belt and an extra strap around her left side. She also wears a pair of black & green, detached pant-legs with loose green socks and black boots.

Kirika's pajamas.
Add a photo to this gallery

Kirika is a cheerful, sometimes childish, and upbeat girl, often seen as enthusiastic - especially when compared to Shirabe and Maria. She cares very much for her teammates and is willing to do whatever it takes to save humanity. Her relationship with Shirabe in particular borders on the romantic, and she is extremely protective of her. After falsely coming to believe that she is the reincarnation of Finé, Kirika becomes increasingly unhinged out of panic at the loss of her identity, to the extent that she's driven to attempt suicide when she realizes her mistake. She uses "death" (デス, desu?) as her catchphrase.

Kirika has a habit of holding things, such as pillows and other people, when she sleeps.[7]

Kirika's past prior to becoming part of the Receptor Children is largely unknown. She is an orphan who doesn't know her own birthday.

After the death of Ryōko Sakurai during season 1, the F.I.S. attempted to determine if Finé had revived in any of the Receptor Children, but were unable to do so. They then planned to dispose of the project, but due to an armed uprising led by Nastassja — with the help of funding provided by the Bavarian Illuminati — the existence of the confined Receptor Children was brought to light. In fear of criticism from the international community, the US government quickly changed their tune and arranged for the children to be released of their own will or provided shelter. At this point, Maria, Shirabe, and Kirika joined with Nastassja and Dr. Ver in order to stop the fall of the Moon. 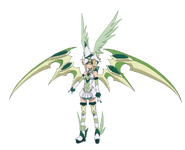 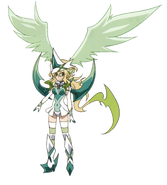 Kirika's Amalgam
Add a photo to this gallery

Kirika owns the Relic Igalima. As a candidate for the Symphogear, she has the ability to fight Noise with the use of the anti-Noise armour that clads her in battle. However, she requires LiNKER to do so.

Her Armed Gear is a green scythe capable of transforming into exotic edged weapons, which in its inactive form instead resembles a sickle. In addition to this, Igalima's four shoulder pauldrons can be used as rockets or grappling hooks.

Vitalization
Add a photo to this gallery

Wild Party: Michelle
Add a photo to this gallery

Retrieved from "https://symphogear.fandom.com/wiki/Kirika_Akatsuki?oldid=108034"
Community content is available under CC-BY-SA unless otherwise noted.