She was a Symphogear user and wielded the Gungnir relic before her death.

Kanade was a tall girl who had long fluffy red hair with a shape of a feather that falls down to her waist and red eyes. She wears a short sleeveless and collar-bearing green shirt and denim short-shorts as her casual attire.

Her Zwei Wing concert clothes consisted of a light pink and hot pink strapless pleated dress with a light yellow petticoat, a large coral colored bow and a right wing on her bustle. She wore it with a light pink scarf and white heels.

As seen in Episode 4 her training attire was a white T-shirt and red shorts. She has also been seen in a mechanic outfit, in Episode 9.

In the manga, it was shown that Kanade has a tattoo of a wing on her back.

Kanade was a cheerful and brave person. She lost her family during a Noise attack, but she didn't lose hope. When she died, the last words that she spoke to Tsubasa were:

"Do you know, Tsubasa? Singing your hardest, really leaves you really hungry."

On the Senki Zessho Symphogear official page Kanade describes herself:

"However, against an opponent that's defined as the enemy, I have to use severe intensity everywhere. My spicy, bright-spirited behaviour is noticeable."

Kanade first appears in Episode 1, two years ago, speaking to Tsubasa, who is hiding away. She points out Tsubasa's nervousness, causing her to blush. Kanade flicks her forehead and makes another comment about her seriousness. Soon after, Genjuro approaches them and begins to speak only to be interrupted by Kanade, waving her hand and telling him not to sweat it.

After Genjuro leaves, Kanade is seen stretching as she talks excitedly about the concert, however when she sees Tsubasa's nervous expression she stops and hugs the girl from behind. She makes another comment about her seriousness and comforts her. The two of them stand, taking each other's hands and get ready for their appearance on stage.

The concert begins and the two of them fly from the roof onto the stage while waving to the audience. They begin to dance and perform Gyakkō no Flügel. However, as they prepare to continue on to their second song (ORBITAL BEAT), a large mass of Noise appears and begins attacking the audience. Even though there hasn't been an order Kanade jumps off the stage and activates her Gungnir. Summoning her Armed Gear she begins to destroy the Noise. with the use of her Stardust Foton she destroys many and Tsubasa joins her in battle. With the use of her Last Meteor she destroys another handful of Noise including one of the giant ones but as Kanade's Symphogear begins to run out of power, she is attacked by a Noise and shoved farther back.

She sees Hibiki fall and jumps in the way to save her. She tells Hibiki to run as she continues to fight the Noise. As the Noise mount their attacks Kanade's suit begins to fragment and one piece pierces Hibiki in the chest. Seeing this, she runs to Hibiki and tells her to open her eyes and not to accept death. As Hibiki opens her eyes, Kanade smiles and picks up her Armed Gear, raises it and sings her Superb Song, destroying all the Noise in the area and falling to the ground. Tsubasa holds her body as she turns to dust and is blown away.

In Episode 2 Tsubasa remembers Kanade telling her there was nothing to be afraid of as long as they were together.

In Episode 3 Kanade's death is finally seen. She is being held by Tsubasa, claiming she can no longer see her. Kanade then apologizes, as it would be their last time together and calls Tsubasa a cry baby as she closes her eyes and her body turns to dust and is blown away. Tsubasa tries to hug what is left and calls her name.

Episode 4 reveals Kanade's past. Five years ago, when she was 14 Kanade, is seen bound in a chair with Genjuro, Tsubasa, doctors, and agents watching her as she struggles against her bindings, cursing up a storm. Noise had attacked her and her family while they were on holiday and she is the only one alive that is potentially compatible with a relic. Kanade then (while still swearing) demands the power to fight the Noise and slaughter them as revenge for the death of her family. She expresses that she'll do whatever it takes to kill the Noise. As she finally stops talking Genjuro pats her head and hugs her, knowing what it will take to for her to become compatible with the Gungnir.

She is then seen being strapped down to a table as they inject her with LiNKER in order to make her compatible with Gungnir. As she breaks free of the binding she injects herself with more LiNKER, causing her compatibility to rise due to overdose. She then coughs up a pool of blood as the doctors try to keep her stable and alive, and then activates her Gungnir for the first time.

Later, she and Tsubasa are seen fighting and afterward lifting rubble to free some trapped soldiers, who told her that even though they were buried underneath all the rubble they could hear her song and it gave them hope. She is then seen running and training with Tsubasa, expressing how much she enjoys letting others hear her songs.

As Tsubasa is seen once again figuratively drowning in Episode 5 Kanade's spirit appears, still dressed in her concert clothes, and embraces her from behind. Kanade chides Tsubasa for being too serious and tells her she might break if she is too stiff. Tsubasa begins to tell her of her training and battle and the two are seen sitting on the ground of the destroyed stadium from 2 years ago. She then begins to tell Tsubasa about her own thoughts on the battles and when asked she tells Tsubasa that it is something that she has to find out on her own. She tells Tsubasa that she is one who decides if Kanade is near or far from her as Tsubasa wakes up.

Kanade sneaks up behind Tsubasa, who hus as she fixes a motorcycle in Episode 9. She comments about Tsubasa's new license and teases her about singing outside of work and lightly flicks her forehead before leaving. Through out the episode Kanade's voice appears to Tsubasa and helps her along.

An alternate version of Kanade was introduced in the XDU event Katayoku no Sōsha. In this alternate world, it was Tsubasa who sang the Superb Song instead of Kanade. Losing her partner caused Kanade to be consumed with a desire for vengeance against the Noise, even going to the point of quitting her idol career.

Fortunately, meeting the Candidates from the main series allowed Kanade to grow out of her need for revenge, eventually becoming a big sister figure to an alternate version of Serena Cadenzavna Eve.

The event Sōyoku no Sirius gave Kanade a second relic, Brisingamen, which she was able to combine with her Gungnir relic to obtain greater power.

Kanade owned the Third Relic Gungnir with which she harmonized by using the LiNKER drug. As a Symphonic gear user she had the ability to fight Noise with the use of the anti-Noise armour, the Symphogear, that clads her in battle. Her Gungnir is much similar to Maria Cadenzavna Eve's, but unlike Maria she doesn't wear a cape and her Gungnir's color scheme is white, black and orange.

As a candidate for the Symphogear, she has the ability to fight Noise with the use of the anti-Noise armour that clads her in battle. However, she requires LiNKER to do so. Her armed gear is a white and gold lance.

Unlike her successor Hibiki, Kanade is able to summon an armed gear and possesses more armour. 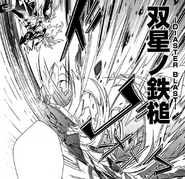 ULTIMATE∞COMET
Add a photo to this gallery

She and Tsubasa first met each other five years ago, when she was taken to custody by Genjurou. Tsubasa initially was very afraid to face her, but eventually, the two reciprocated and established a strong relationship. Despite initial fanatic behavior, Kanade showed her deeply caring nature and always cheered Tsubasa in difficult times. When Kanade died, Tsubasa was deeply saddened by the tragedy and always blamed herself for the death of Kanade to a point she even rejected Hibiki at first place.

She only met Hibiki when she saw that Hibiki was fatally injured. It was Kanade who gave the determination to Hibiki, even yelled on her to not die. One part of her Gungnir relic fell into Hibiki's body, which had affected on Hibiki in the future, thus gave Hibiki the ability to transform into a Gear fighter like Kanade, although it isn't as powerful as Kanade's.

Retrieved from "https://symphogear.fandom.com/wiki/Kanade_Amou?oldid=108233"
Community content is available under CC-BY-SA unless otherwise noted.