The Ignite Module (イグナイトモジュール, Igunaito Mojūru?) is a power-up for the Symphogears introduced in Senki Zesshō Symphogear GX as a final result of "Project Ignite". It utilizes a shard of the relic Dáinsleif to harness the strength of the Berserk mechanism into a form that keeps the sanity of the user.

With the command Drawn Blade (抜剣, Bakken?) and Symphogears that have been enhanced by Elfnein's alchemy, they can briefly increase their power exponentially.

When the damaged gears were restored, this was added as a combat booster. It utilizes the "Berserk" mechanism that had been analyzed after previously being observed in cases of sacrist/human fusions. As a result, the module is capable of bringing out energy levels on par with that of the berserk mode. However, because it also offers the ability for the user to retain their presence of mind and utilize their fighting techniques, it can be considered a considerable improvement in fighting strength outside of measurable values. The large increase in output does more than simply raise offensive strength, it also raises defensive power which reduces the burden the adapters feel from the backfire, increasing their durability. This change in offensive and defensive power makes this a trump card useful for getting out of difficult situations.

The Ignite Module grants the user a high increase in energy output and durability for a short period of time. Because the threats that accompany the berserk form are still present, the module is furnished with 3 different levels of safeties to ensure that the adapter will not lose their mind when using it. Each time a safety is released, the berserk energy is more purely focused into the user's combat potential. However, there is a time limit attached (a count of 999), this starts from when the first stage of Unsheathe is activated. From there if the user proceeds to the second grade or beyond, the energy gets used up at an even faster rate and upon use will naturally exhaust the count faster. When the count becomes 0 the system will forcibly cancel the Symphogear, even if the user is in the middle of a battle, and therefore depending on the circumstances may expose them to even further danger.

During the battle with Adam Weishaupt, the shard of Dainsleif was used as a catalyst to divert the strain of alchemic energy from the Symphogears, disintegrating the shard and the Ignite Module along with it.

The appearance of the Ignite form varies widely between relics, but it will usually introduce a lot more black and dark tones into the user's color scheme, as well as sharpening design elements and thinning out the main leotard so that it shows more skin. Each Ignite form also displays a butterfly-shaped emblem on the chest of the user.

When used with X-Drive, the wings turn into black fire, and the fire extends to the arms, legs, and even headgear. The rest of the appearance applies, and the X-Drive 'wings' look much larger and have a wider span.

The timer for the Rubedo Phase

Hibiki facing her Relic in its Ignite Module form.

Tsubasa facing her Relic in its Ignite Module form.

Chris facing her Relic in its Ignite Module form.

Maria facing her Relic in its Ignite Module form.

Shirabe facing her Relic in its Ignite Module form.

Kirika facing her Relic in its Ignite Module form.

The three of them fighting to control the Ignite Module's power.

Swift Union of Wind and Moon 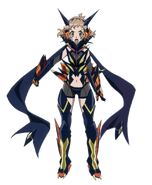 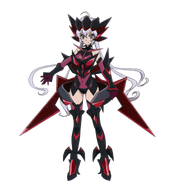