Igalima (イガリマ, Igarima?) is the Symphogear that clads Kirika Akatsuki. Its counterpart is Shul Shagana. Her Armed Gear is a green scythe that is meant to cut spirits. Its model number is SG-i02.[1]

In the XDU event Wasō Ranbu, Igalima's traditional gear exclusively uses a naginata instead of its standard scythe.

Shul Shagana (Šulšagana) and Igalima are the children of Zababa and Ningirsu (the main god of the pantheon of the city-state of Lagaš) of the Sumerian god mythology.

Igalima, along with Shul Shagana and the mysterious relic that was labeled Airgetlám, originally belonged to the ownership of the Iraq government.[2] The US government accused the Iraq government's relics as being 'weapons of mass destruction', and the Iraq War broke out as a result of attempts to seize them. Afterwards, the US announced there were really no WMDs, but this was an attempt to cover up the fact the US had secretly obtained Igalima, Shul Shagana, and Airgetlám.[3]

Afterwards, the relics were given to the FIS, where they were made into the Symphogear that Kirika, Shirabe, and Maria now wield. 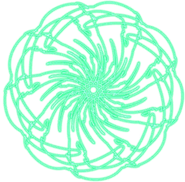