Ichaival (イチイバル, Ichībaru?) is the Symphogear system created from a fragment of the second classified Relic, Ichaival. Its user is Chris Yukine, who obtained it through Finé. Its model number is SG-r02.[1]

The relic focuses on long range-projectile weaponry, mainly bows; due to Chris' violent imagination,[2] however, she is able to manifest the gear's armed gear into guns. In the XDU event Wasō Ranbu, Ichaival's traditional gear exclusively uses an archer's bow as a weapon.

The term "Ichaival" ("yew-vale") is a rough translation or modification of "Ýdalir", "yew-dales", the home of the Norse god Ullr. Ullr is often recorded and depicted as a god of archery, hunting, and the winter, whose name (which means "glory") people invoked during battle in hope of aid. Ichaival is often claimed to be a name for Odin's bow, but this does not appear to have any historical basis. Part of the reason for the misattribution is because Ullr is an old god who predates the time when Norse myths began to be recorded, and most myth related to him has been distorted as a result of being passed down by word of mouth.

In Japanese, ichii ('イチイ' or '一位') is a term that refers to a yew tree, specifically the Taxus cuspidata. Yew wood was preferred over other trees to make bows with. There is speculation that the val/baru part of Ichaival could be a warped pronunciation of ichii no tani (イチイの谷, ichii no tani? "Yew Valley"), the Japanese name for Ýdalir. Others speculate the val could come from the ballista, a giant crossbow-esque weapon.

At a point during World War II, Japan was facing a losing war and tension was running high. In the interest of researching something that might help to turn the tide, Ichaival was obtained from Germany. However, ten years prior to the events of season one of Senki Zesshō Symphogear, Finé stole Ichaival from Section Two while the headquarters were being constructed.[3] At this point, the commander of Section Two was Tsubasa's grandfather, Fudo Kazanari. He resigned as a result of the scandal over Ichaival's disappearance, and a young Genjuro, who was working as a Public Safety officer at the time, was assigned as the next commander in his place.[4]

Eight years later, Finé gave Ichaival to Chris, and trained her until her coeffiency link was high enough to produce the sufficient phonic gain to awaken Solomon's Cane, allowing Finé full control over the Noise. This training took half a year to complete.[5][6] However, Chris refuses to actually use Ichaival in battle because of her guilt over awakening a weapon used for destruction, as well as her hatred of songs caused by her refusal to accept the deaths of her musician parents. Because of this, and to hide the existence of Ichaival from Section Two, Finé gives Chris the Nehushtan Armor to use in the kidnapping of Hibiki.

When the Nehushtan Armor proves useless against Tsubasa and later Hibiki, Chris abandons it in favor of the immediately-more-effective Ichaival. Finé then takes the Nehushtan Armor back and abandons Chris, forcing Chris to have to use Ichaival to fight and defend herself. Chris later comes to terms with the use of her song and uses it to help save the world from the blast of Finé's Kadingir, her sacrifice buying Tsubasa enough time to destroy Kadingir and foil Finé's plans. 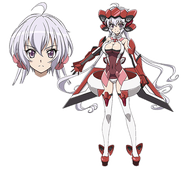 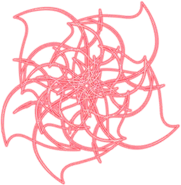