Gungnir (ガングニール, Gangunīru?, lit. "Swaying One") is the third Relic; Its previous user was Kanade Amou, then passed to its current user, Hibiki Tachibana.

Throughout most of G and briefly in GX, it was used by Maria Cadenzavna Eve, who used a darker variant of the relic which is referred as Black Gungnir (黒いガングニール, Kuroi Gangunīru?).

Its model number is SG-r03. Black Gungnir is designated SG-r03' to differentiate the new Gungnir from the original. The apostrophe is to indicate it was developed later.[1]

Gungnir is a spear owned by Odin, god of the Norse Mythology. It was said that the spear will never misses and always kills its target.

According to Ynglinga Saga 9, Gungnir was the sacred weapon on which oaths were sworn and treaties were agreed. By the use of Gungnir, Odin pierced his side when he offered himself on the world tree Yggdrasil.

In AXZ, Gungnir is revealed to be a Philosophical Armament from 2000 years of being associated with the death of divinity as the spear used by Saint Longinus to check if the Son of God had died, granting it the ability to kill gods and divine entities.[2][3][4]

Generally, when the Symphogear is removed by the user, the energy levels will return to normal and it will reconfigure into its pendant form. However...

At the time of the concert tragedy, fragments of the gear were embedded into the area near Hibiki's heart. They remained there and eventually ended up fusing with her body.

Furthermore, ever since Hibiki became a Symphogear user, whenever she activated the system itself the fusion would spread even further in a manner much like cancer cells, slowly altering her body. This granted her superhuman regenerative abilities and even the ability to touch Noise with her bare hands without any consequences, along with explosive power that continually grew stronger every time she transformed. The fusion also had the side effect of causing Hibiki to sometimes enter a berserker rage where her entire body turned black, her mouth gained fangs and her eyes turned red.

Eventually the broken Gungnir's explosive power grew too great, causing Hibiki's body to become intensely overheated, and not long after this malformed spears began to burst from her body. Shortly before this stage could kill her, Gungnir was destroyed by the light of the Shénshòujìng, purging all traces of it from Hibiki's body but leaving her with a strong synchronization with other copies of the relic. She later acquired Maria's undamaged Gungnir to replace it, which she uses in the normal manner.

Kanade was the first Gungnir user. Because of her low natural compatibility with Gungnir, she was reliant on LiNKER to utilize it, having to overdose on LiNKER to first establish the connection but then able to maintain it with more controlled dosages. This would often lead her to coughing up immense amounts of blood due to the overdosage which would have caused immense excessive bleeding and pain inside of her body. Until her levels were high enough for her to be compatible enough to utilize the power of Gungnir which she ended up summoning on the day she nearly bled to death.

This resulted in her having much greater raw power than Tsubasa due to Gungnir's superior power (she even possessed abilities that Hibiki can't even use) but in contrast to this it would give her with a time limit before her synchronization dropped.

Kanade's reliance on the then-unrefined LiNKER would eventually have killed her from the strain on her body, but she died much sooner after needing to use her Superb Song, which with her failing compatibility was enough to kill her.

Fragments of her Gungnir from this incident wound up buried in Hibiki's chest leading her to inherit the relic accidentally from Kanade's recklessness.

Her Armed Gear was a long red and white spear with a yellow blade, which is actually two blades arranged in a cross shape. It could be utilized as a sword due to its shape, but served primarily as a lance or spear. It could also clone itself into many (like the mythological weapon it was based off) "STARDUST∞FOTON" and spin like a drill to create tornados/whirlwinds "LAST∞METEOR" which could be fired at the enemy with extreme force.

Hibiki doesn't hold an Armed Gear, both due to possessing only a fragment of Gungnir and due to her wish to bring people together. Instead the energy meant for use in an Armed Gear directly alters her fists and feet, allowing her to remain empty-handed. This eventually proves to be a benefit rather than a hindrance, as her strong will to avoid fighting and connect with other people allows her to join hands with others since she has no weapon to hold in her hands. After gaining Maria's Gungnir, Hibiki became able to utilize Gungnir's normal Armed Gear, but instead prefers to form it over one arm for use as an oversized war gauntlet.

Referred to as the Black Gungnir (黒いガングニール, Kuroi Gangunīru?),[5] the Symphogear that clads Maria Cadenzavna Eve. As its wavelength was observed in episode 2 of G, it appears to be a real Gungnir with its Armed Gear. Maria's Gungnir is similar to Kanade's but has a mantle and is dark blue instead of white. The mantle which Maria could control to animate and change shape, using it as her primary form of offense and defense instead of her lance. In episode 4 of G, while fighting with Tsubasa, her Armed Gear is seen to be summoned to her hands. Both blades of her Armed Gear can split open to expand the lance into a large energy cannon, which after a short charging time unleashes a purple energy beam, known as "HORIZON†SPEAR". She is also a LiNKER user like Kanade.

Black Gungnir is considered to be a relic from the "Dark Symphogear" category. It was created at the same time as the white Gungnir - from a piece of the original spear.

The term "black" was put in the front of "Gungnir" to distinguish from the other Gungnir.

Her Armed Gear is very similar to Kanade's, but slightly different in shape and color palette. This Gungnir was later used by Hibiki to replace her original Gungnir.

Kanade after she activated her Gungnir for the first time 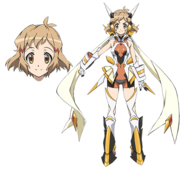 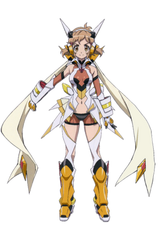 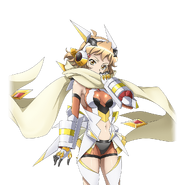 Gungnir setting the grass on fire due to overheating 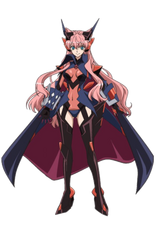 Maria's Black Gungnir from Symphogear G in the shadows. 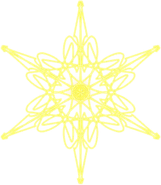 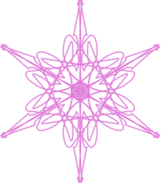 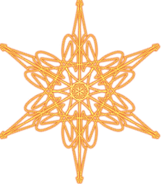 Gungnir as "God-Slayer" in AXZ Episode 11