Enki (エンキ, Enki?) is a Custodian who was Finé's lover during her first life. He appears as a posthumous ally in Senki Zesshō Symphogear XV.

Enki's name is taken from the Sumerian god of water of the same name, also known as Ea in Babylonian mythology.

During the age of prehistoric civilization 5,000 years ago, in ancient Shinar,[1] Enki is shown in a control room resembling the ones seen on the Frontier. While struggling with heavy wounds such as deep gashes and a missing left arm, he activates a network jammer on the Moon. As he monologues that he doesn't have the time or words to explain everything he collapses from his injuries, asking Finé to forgive him.

Prior to this, Enki fought a fatal battle with the former remodeling surgeon Custodian turned language existence, Shem-Ha Mephorash. As a result, his left arm was transmutated into silver, which he self-severed, and knowing Shem-Ha's immortal language existence, with haste activated the Network Jammer Balal through a terminal on Earth to prevent her future domination of humans as her biological terminals for control and revival. The battle was transmitted as a dream from Airgetlám to Maria when she and Tsubasa were teleported with the others from Tanegashima to the Moon, with Maria's pendant guiding them to the control center.

During the finale song Xtreme Vibes in the core of the Yggdrasil System, Enki is seen reuniting in spirit with Finé.

Final Spirits in Xtreme Vibes
Add a photo to this gallery 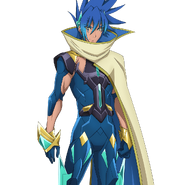 Retrieved from "https://symphogear.fandom.com/wiki/Enki?oldid=102263"
Community content is available under CC-BY-SA unless otherwise noted.