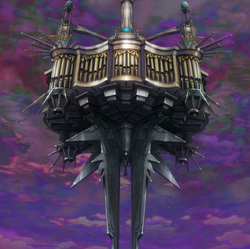 The Château de Tiffauges (チフォージュ・シャトー, Chifōju Shatō?) is a megastructure comprised of multiple relics that Carol Malus Dienheim built with the help of the Bavarian Illuminati.

The Château (French for "Castle") is a massive artifact that serves as Carol's base and also her machine of world destruction. It's design is similar to a large church organ with the mechanism of a music box on the inside, with four pedestals for the Autoscorers to rest, a control room and several hallways that can summon Noise and materialize illusions based on the intruders, most specifically, Maria's illusion of Mom, herself as Black Gungnir and lastly Serena before Maria destroy it with SERE†NADE.

It's main function is to use alchemy alongside the song of Dàinsleif recorded by the Autoscorers to draw power from earth's ley lines and initiate a process of disintegration of the planet. However, with the interference of Dr. Ver, the Château was reversed to reconstruct and upon overloading, Carol destroyed it herself, ceasing all functions of the Château, falling with the clanging of bells.

At the end of a fierce battle, it collapsed above the former metropolitan government building and fell under the management of the Kazanari Agency. However, due to the complex interaction of a number of heretical technologies, the situation must be handled very carefully and demolition of the structure has been proceeding slowly. Its breathtaking presence towers to the heavens like a gravestone.[1]

The Château appearing from the sky

The Château getting destroyed