Ame no Habakiri (天羽々斬, Ame no Habakiri? lit. "Blade of Heavenly Wings") is the Symphogear system created from the fragment of the first classified Relic, Ame no Habakiri, its user, Tsubasa Kazanari. The relic focuses its weaponry on blades, and has a blue theme color. Its model number is SG-r01.[1]

This Relic originates from the legendary sword (popularly called Totsuka no Tsurugi) used by the Shinto God Susanoo of Japanese mythology. Its name means "Snake-Slayer of Takamagahara": "Ame" (天) being another word for Takamagahara (高天原), the Shinto heaven which is home to the Amatsukami gods; and "haba" (羽々) being an archaic term for "snake", this name coming from its being used to slay the eight-headed snake Yamata-no-Orochi.

Totsuka-no-Tsurugi (十拳剣, "Sword of Length of Ten Fists"?) is not a specific sword, but a common noun for any sword of this length. In Japanese mythology, numerous deities own a sword of this kind. One of these is Ame no Habakiri.

Ame no Habakiri has undergone the most evolutions of any existing Symphogear due to its long period of operation. Between the prologue and the beginning of Symphogear's main story, additional armor plates on the shoulders and back were gained, along with the characteristic ankle blades. Like Hibiki's Gungnir and Chris's Ichaival it underwent further evolution by the time of Symphogear G. However, it did not gain "wings" like those of Hibiki's G-version armour. 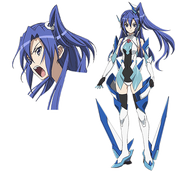 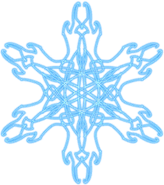