He is an alchemist, and the leader and founder of the Bavarian Illuminati. His lineage is shrouded in mystery.

He is based on the real-life German founder of the Illuminati, Adam Weishaupt.

The director and foremost authority of the Bavarian Illuminati. Within the organization, there are some who say he is "all looks and no brains." They believe he has no sense for alchemy and see him as no more than simply ordinary. Furthermore, he is seen as surprisingly incompetent as the organization's leader. Despite all that, the reality is that he is an individual whose magical potential far surpasses any ordinary man. He controls numerous alchemists by force as a master of the craft who has no equal. Details about him are shrouded in mystery, he has been the organization's director since its creation but his actual age is unclear.[1]

His true identity is a scrapped human prototype, a puppet, created even before the era of prehistoric civilization. The reason he was scrapped was for being too "perfect." He was outfitted with all the abilities and functions that his creators wanted, but only those and nothing else. Eventually it was determined that this caused him to have zero potential for evolution and thus he was passed over as being officially designated as "human." He was scheduled to be expunged, but broke free of his chains and fled. His creators ceased to hold any further interest, leaving him to lurk throughout history. Instead, his creators combined the qualities they both liked and disliked into an imperfect being (the human species), which they formally accepted. However, Adam realized he had surpassed these beings and thus was determined to find a way to stand on equal ground with his creators.

That was the beginning of the society formed by Alchemists. In order to stand above all else, the Bavarian Illuminati was created under the ideal of seeking perfection. However Adam was already "perfect," yet could not produce any new power or plans on his own. Thus in order to reach his creators, he compensated by leaving it all in the hands of the other Alchemists. The Philosopher's Stone, the transmutation of gold, Tiki, his use of the four elements, and even his cool hat were all things laid out before him by someone else's research. The perfect yet incompetent Adam has always progressed toward his goal with a smile on his face, treading paths that had already been forged by others. [2]

Adam is first mentioned by Maria Cadenzavna Eve in episode 12, said to be the director of the Bavarian Illuminati and the one behind the concealment of news about the Moons irregular orbit after the Lunar Attack.

Adam appears as the main antagonist of Senki Zesshō Symphogear AXZ, with his goal being the attainment of Divine Power to stand equal to his creators that abandoned him, the Custodians.

Having exhausted a considerable amount of his power to open an alternative God's Gate within the Orion constellation, he planned on the Divine Weapon being able to make up the difference during the final showdown with the gears. However, he was promptly defeated in a single blow from the God Slayer. Facing this desperate situation, he was left with no choice but to divert the energy he uses to maintain his beauty (quite an enormous amount), and turn it into offensive power. Thus, he grew horns and took on a final form, which resembled that of a demonic goat. In reality, this is his true form that he has kept hidden behind his pride out of shame.

While engaging in battle with the gear users and accidentally supplying them with alchemic energy from Saint-Germain's Spellcaster, Adam was slain by Hibiki Tachibana after she was powered up by Golden Transmutation.

When Hibiki saw his photo on screen, she had flashback of him saying "Hope was destroyed today. Despair of tomorrow, of the future![3]

An alternate version of Adam was revealed to have promised Izak Malus Deinheim to look after his daughter. However, Carol wound up running away and stole the Château to cause that world's own version of the Magical Girl Incident. This wound up causing Adam to assist his world's version of Genjuro in leading their version of S.O.N.G.

Adam is uncaring, sadistic, insane and a power hunger psychopath. He desired is to acquire so-called "Power of God" to create a "new world" by wiping out humanity. He has no concern for all of his minions as they are nothing but pawns to his goals. He viewed himself to be a "perfect being". He viewed Tiki to be a tool and has no hesitation of killing her. After his defeat, he believe hope is destroyed and despair will continue.

As an alchemist who has lived for many years, Adam is a strong individual. 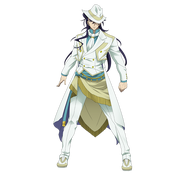 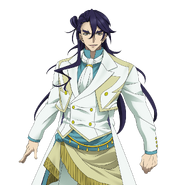 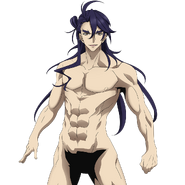 Adam alongside Tiki in the past

Adam is discovered to be a puppet

Adam tells Saint-Germain and Hibiki about his origin

Adam using his dismembered arm to adjust his hat

Adam faces off against the Symphogear users

Adam vs Maria and Tsubasa

Adam vs Shirabe and Kirika

Adam captures Hibiki in his grasp

Adam and Tiki in the OVA

Adam in the OVA